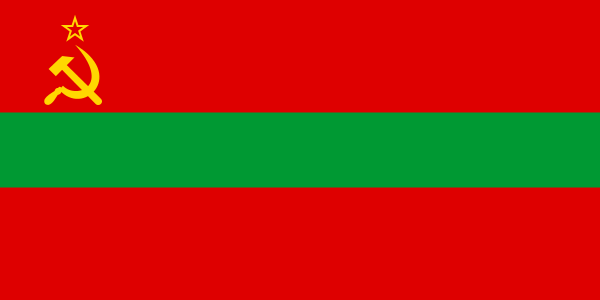 As reform began to sweep the Soviet Union in the early 1990s, a narrow strip of land along the River Dniester unilaterally declared itself as a separate republic within the USSR. Months later when the Soviet Union began to break up, the newly independent Moldova laid claim to the same territory and war ensued. Nearly 3 decades after a ceasefire was declared, Moldova still claims the territory but Transnistria continues to function as an unrecognised, yet independent state. Just hours before we set off on our day trip to the cities of Tiraspol and Bender, we were warned off going amid horror stories of rampant crime and human trafficking… we’d heard these stories too, but were determined to see for ourselves what Transnistria had to offer.

NOTE: This chapter is NOT an endorsement of claims made by either side. It only presents Transnistria as a destination from a traveller’s point of view

Although Transnistria has 3 official languages, Russian is very much the lingua franca and most people will instinctively use it when speaking to you. Ukrainian and Moldovan are also officially recognised, but some argue that speaking Moldovan, which is essentially the same as Romanian, is best avoided in Transnistria given the conflict and lingering disputes. Spoken by some 260 million people, Russian is the one of the world’s most widely-spoken languages and thanks to the legacy of the USSR is understood throughout Eastern Europe and Central Asia. Though daunting at a first glance, here are some phrases to get you started in Russian, including both their native Cyrillic spelling and a transliteration.

As Transnistria doesn’t have an airport catering to passenger flights, Chișinău International is the closest alternative some 62km west of Tiraspol. Buses from the Moldovan capital to Tiraspol take around 75 minutes. With less paper work required to visit and shake-downs for bribes at the border now all but unheard of, getting into Transnistria is much easier than it once was – but if you’re still sceptical about visiting, consider taking an organised tour.

Also known as Tighina in Moldovan, Bender is the only city on the western bank of the River Dniester under the control of Transnistrian authorities. Finding itself on the border of many empires down the centuries, the city has long been an important military outpost, as demonstrated by the Bender Memorial Military-Historical Complex. A military cemetery has stood on this site since at least the 19th century and it’s believed some 5000 troops, including Romanians, Russians, Germans and Ukrainians are all buried here. Though some of the original stone headstones can still be seen, the site was extensively renovated in 2008 and saw the addition of a small colonnade of white columns, near the statue of Grigori Potemkin.As you wander through the peaceful green lawns, take a moment to reflect at some of the more than 4000 names inscribed on the graves marked by black or white granite crucifixes, or at the slender white Chapel of the Holy Saviour’s Image at the far end. Back out on the main road, the pale stone Triumphal Arch was erected in 2008 to commemorate both the 600th anniversary of the first written mention of Bender and the Imperial Russian victory over the Ottomans in 1829.

Across town, construction on the turrets of the Bender Fortress began in the 1530s and over the course of the 19th century saw numerous clashes between Tsarist Russia and the Ottoman Empire. After decades of being a secure military facility, the citadel has recently reopened to the public even though it is still being restored to its former glory. Wandering along its ramparts rewards you with some great views across the River Dniester, while inside the castle itself there are several museums. The Military-Historical Museum displays a collection of artefacts found at the site such as coins and weaponry, while the ghoulish Museum of Medieval Torture Instruments is housed in a suitably atmospheric cell. Outside the castle walls, as you stroll through the newly laid out park you’ll spot the golden domes of the Military Church of Aleksandr Nevsky. Although the building seen today only opened in 2011, the original church was consecrated in 1833 and was one of the oldest places of worship in Bender. Directly next door, the small maroon chapel is dedicated to Tsar Nicholas II and his family who were canonised after their execution in 1918.

Just 12km east of Bender, Tiraspol is the capital and largest city of Transnistria, home to over a quarter of the entire population. It is also the seat of the Transnistrian government, who meet inside the huge brown Government Building, also known as the Supreme Soviet. Though it’s perhaps the most well-known landmark in the city, the typically communist-era building is closed to the public but still worth a photo stop thanks to reportedly the largest statue of Lenin in Transnistria standing outside. Although taking pictures is allowed, venturing too close may prompt a run-in with security. Across the street, you’ll find some statues and a marble wall that forms the Tomb of the Unknown Soldier with sombre cenotaphs dedicated to those who fell during the Soviet war with Afghanistan and the more recent conflict with Moldova. The wide paved area gently sloping downhill is known as the Memorial of Glory and amidst the tombs you’ll find both Transnistria’s Eternal Flame and a decommissioned T-34 Soviet Tank with ‘for the motherland’ written across it. Such tanks were originally designed for combat on the Eastern Front during World War II.

Down the hill from the memorial, Suvorov Square covers over a hectare at the centre of Tiraspol and is presided over by the impressive equestrian statue of Aleksandr Suvorov, who founded the city in 1792. The large open space is surrounded by many of the city’s main sites, such as the classical City Palace of Culture and the more brutalist-looking Palace of Children and Youth Creativity. It’s also a great place to people watch as events such as the annual tank parades on Victory Day take place here. Following the city’s main road Ulitsa 25 Oktyabrya away from the square, you’ll eventually come to the austere-looking House of Soviets, a typical example of Stalinist architecture built in the mid-1950s. Serving as Tiraspol’s city hall, the columns holding up the façade are decorated in the colours of the city’s flag while a particularly stern bust of Lenin keeps watch outside. Some have reported that taking pictures too close has led to problems with security – staying across the road gives you a much better composition anyway!

Many dismiss visiting Transnistria as either stepping into a Soviet time capsule or a venture into bandit country – but the truth is much less polarised. Bender offers a fascinating insight into the region’s turbulent history and while it’s true Tiraspol feels like a Soviet relic, amidst the ever-present symbols of the USSR there are also visible signs of change. Following the usual travel precautions, Transnistria presents as no more dangerous than anywhere else in the world and a trip here won’t soon be forgotten!

A huge thank you to Ecaterina Protei for being our driver and an awesome guide on our day trip to Transnistria – we learnt a lot and had a fantastic time! A big thank you too to Bogdan Fedeleş tagging along on the day!

For a more in-depth guide to planning day trips, as well as sightseeing tips and trivia for 30 European countries, Europe in a Day – Day Trips to the Continent is available exclusively on Amazon for Kindle and also smartphones, tablets and computers with the free Kindle Reading App.

Want to discover more of Europe? Check out more day trips below!